It’s an important day in the history of the Internet. Despite enormous pressure from the Big Media corporations, the US Federal Communications Commission (FCC) bowed to the democratic pressure of millions of Internet users. These users demanded strong protections against “slow lanes” for their network connections, and to preserve equal protection for all content traveling across the public Internet.

I’ve written about this before, most recently just after President Barack Obama came out for “the strongest possible protection for net neutrality.” If you’re confused by this whole thing, I hope that piece will help clarify things for you. 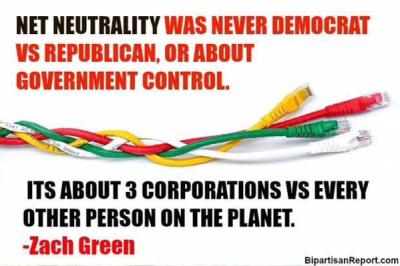 Speaking of confusing, some of the arguments made today against the plan were … interesting. For months, Republican legislators have been denouncing a plan to change the way Internet domain names are allocated around the world as “Obama’s plan to give away the Internet.” Did you notice how today, some opponents of strong net neutrality rules called this “Obama’s secret plan to control the Internet.”

A Couple of Thoughts on the Meeting

It’s worth spending some time watching the FCC meeting video. The FCC’s two opponents of strong net neutrality spent much of their debate time defending assorted companies that would be hurt by these rules. They also suggested that the public had not been heard on the matter. It was almost a breathtaking attempt to pretend that the 4 million responses to the original (far less neutral) rule presented last May didn’t exist.

That said, I agree with two things Ajit Pai and Mike O’Rielly said. There should have been more public hearings where ordinary people could speak to the commissioners directly. Like other advocates for net neutrality, I’m pretty confident we would have won that battle too.

I also don’t exactly see why Commission chair Tom Wheeler couldn’t have released the new proposal a few days ago. It’s a new era; people expect transparency. And there’s no doubt few minds would have changed in the process.

One year ago, every person I know who understands the FCC or internet policy considered net neutrality dead. But the people were heard.

It’s the truth. A salute to the organizations that even opponents conceded had led the fight:

Ain’t Over Yet, Though

Corporations just don’t lie down when they’ve been defeated. We still have the best Congress money can buy. Courts too. As the founders used to say, “The price of liberty is eternal vigilance.” So connect with the groups above, and we’ll win more victories!

Freelance writer, author of "Build Your Author Platform: The New Rules" (with Carole Jelen), "openSUSE Linux Unleashed" and co-author (with Bud Smith) of "WordPress in Depth." View all posts by Michael McCallister

Robyn Vining: Some things just need to be written

New Story at TechWhirl: Guide to Google’s Season of Docs